Key nose cells identified as likely COVID-19 virus entry points
Two specific nose cell types have been identified as likely initial infection points for COVID-19 coronavirus. Scientists discovered that goblet and ciliated cells in the nose have high levels of the entry proteins that the COVID-19 virus uses to get into our cells, which could help explain the high rate of transmission. The study found cells in the eye and some other organs also contain the viral-entry proteins.

This Is How Alcohol Affects Your Immune System
Coping with the coronavirus pandemic often includes drinking, but how much alcohol increases your risk of getting sick?

The Risks - Know Them - Avoid Them

The woman who discovered the first coronavirus
Posted by Heidi Lindborg at 7:40 AM

Testosterone Makes Men Less Likely to Question Their Impulses
Say it ain't so.

Association of Porphyromonas gingivalis with high levels of stress-induced hormone cortisol in chronic periodontitis patients.
Oh this explains soooo much....

Mystery illnesses are on the rise with women, whom doctors are dismissing as "nervous Nellies"

Is That Two-Week Course of Antibiotics Really Necessary?
Overuse of these drugs can be dangerous and contribute to bacterial resistance

Antibiotics: Even low use in children can have a negative impact on health

Meat eaters tend to have better psychological health than vegetarians
You don't say.

Obesity not related to how close you live to fast food or gyms
Excellent documentation of the obvious.

Follow your gut: Newly identified digestive-brain axis controls food choice
A gut-to-brain circuit drives sugar preference and may explain sugar cravings.
Hmmm, I wonder what the neurotransmitter could be...

How exercise supports your mental fitness

Flickering light mobilizes brain chemistry that may fight Alzheimer's
Yo Gina.  we talked about this.... ages ago... campfire therapy...

Sleeping Brain Waves Draw a Healthy Bath for Neurons
An organized tide of brain waves, blood and spinal fluid pulsing through a sleeping brain may flush away neural toxins that cause Alzheimer’s and other diseases.

Rheumatic diseases: The cost of survival during the Little Ice Age

What Ear Infections Going Back 15,000 Years Tell Us About Human Health

Dwale: an anaesthetic from old England

Evidence of 10,000-Year-Old Crops Points to the Amazon as an Early Agricultural Hotspot

I am really getting into underwater coastal archaeology:
Early humans thrived in this drowned South African landscape
video:  How Doggerland sank below the waves

My new favorite person: Merryn Dinely.  "I have a number of academic publications about ancient and traditional malting and beer brewing, all of which are available to download."
This woman and her husband are the walking, talking embodiment of five hundred generations of dietary induced obsession.   I love her so freakin much... Here's a podcast with her.

This.  This.  This.
What if Competition Isn’t As “Natural” As We Think?
Scientists are slowly understanding collaboration’s role in biology.

Oops, forgot this one.  So cool.

*bumping back up top*

I am lucky that I live in Arizona and have a yard.   I can get as much sun as I need.

If you are stuck inside, please take vitamin D every day.     It's really crucial for a proper immune response.


A recent study found that repeating the “F” word during an ice water experiment increased subjects’ tolerance and threshold for pain. However, reciting made-up swear words showed no such pain-reducing effects.


This article makes me so incredibly happy.
They are wrong in most of their conclusions, but the data is amazing.  (data are amazing?  whatever!)

I can't believe I'm not verbal ticcing...  finally all those years of observing my blurting and cursing comes in handy.  I have been meaning to write this up for a while:

Physical effects of spoken words have nothing to do with their meanings.   It is a result of the activation of certain cranial and cervical nerves via speech production...
This became obvious to me after I moved to Arizona and started saying "I hate you" as soon as I woke up in the morning.  Every. single. day.  I actually did not hate anyone at the time, and I knew it, and I said it anyway...
It was perplexing.   I thought about it for a long time.   Until it got so bad the answer was obvious.

The reason the work FUCK is so therapeutic is it activates certain muscles.
-The initial F pushes the mandible forward and bites the lower lip, pinching the face and tightening the neck
-The UH sound in the middle stimulates the diaphragm.
-And the terminal hard K pulls in the abdominals.

The whole sequence expels your breath and tightens your core. Increases your endurance.
The word Shit is similar, but more staccato.
Their made-up words don't have the same effect.

Hard C/K sounds are very common in tics.
I used to repeat "Corey, Corey, Corey" when stressed or tired.   Always in threes.  I wondered why for a decade after we broke up.   It did not make sense, I did not miss him, but I did it anyway.  Now I realize it was an involuntary breathing exercise...

I have repeated a number of other words for periods of time- most of them seem to have been a method of relieving various transient dental problems.   Certain words move the tongue, cheeks and lips more effectively than others.  ("I despise you" moves the upper lip, "I hate you" does not.)

For the record, this is my favorite hypothesis of mine.  The one that was the biggest mystery.
It took the last 7 years to figure out the physiological triggers, effects, and benefits of cursing like a drunken sailor..
Posted by Heidi Lindborg at 5:05 AM

‘It’s something I have never seen’: How the Covid-19 virus hijacks cells

... They found that within three days of infection, the virus induces cells’ call-for-reinforcement genes to produce cytokines. But it blocks their call-to-arms genes — the interferons that dampen the virus’ replication.
The result is essentially no brakes on the virus’s replication, but a storm of inflammatory molecules in the lungs, which is what tenOever calls an “unique” and “aberrant” consequence of how SARS-CoV-2 manipulates the genome of its target.
Posted by Heidi Lindborg at 2:39 AM

In the midst of the biggest and most deadly pandemic in a century the Trump Administration has cut off all funding to the WHO.
Posted by Heidi Lindborg at 1:59 AM

(flat out stole that.   it's freakin perfect.)
Posted by Heidi Lindborg at 9:37 AM

Same as it ever was

Always remember: You can’t believe a fucking thing he says.

Right now his pals have 29 million doses they won't be using...
Posted by Heidi Lindborg at 8:27 AM

Don't spray disinfectants to kill coronavirus, WHO advises
Spraying disinfectants outside or across broad spaces indoors to try to kill coronavirus can do more harm than good, the World Health Organization advised Saturday.
And spraying people is a really bad idea, WHO said in an updated advisory on infection control.
WHO cited studies showing that trying to spray bleach or other chemicals over a wide area is ineffective. The same goes for ultraviolet light disinfecting, the agency said.
Posted by Heidi Lindborg at 4:06 AM

The ex-pharma exec leading Trump's COVID-19 vaccine program has $10 million in stock options for a company getting federal funding
Posted by Heidi Lindborg at 3:59 AM 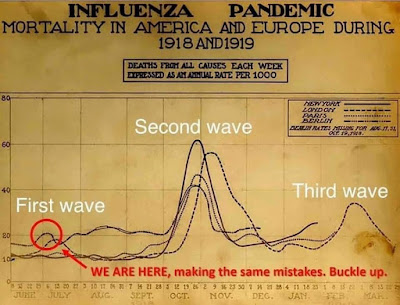 Posted by Heidi Lindborg at 2:09 PM

This is not Rocket Surgery

Nursing homes need to start supplementing their residents' Vitamin D levels immediately.
They really should have been doing this all along, though...

Hey yeah, this goes for prisons too...
Posted by Heidi Lindborg at 7:22 AM

It's flat out a matter of percentages- more copies = more mistakes.

We are the incubators of it's existence and evolution. 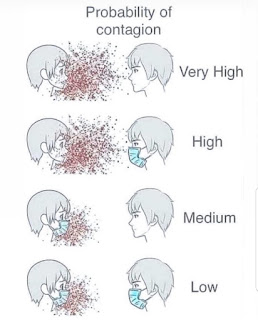 Posted by Heidi Lindborg at 7:16 AM

Vitamin D deficiency may explain some of your disproportionate susceptibility to COVID-19.
You have darker skin, and working or sheltering inside can cause your levels drop drastically low.
Posted by Heidi Lindborg at 8:44 AM

I really must rerun this article-

Let’s Talk About Protecting Our Families

Man: Hey God, I just want you to know I am committed to protecting my family at all costs.
God: Gosh, that’s great to hear. One of the main things I need you to do to protect your family is laundry. Tons of laundry.
You know kids — they’re so susceptible to infections and viruses. Pinworms, athlete’s foot, lice, strep throat, colds and flues. Pneumonia and diarrhea are serious killers of children under five. The list of possible sicknesses is endless. So you’re going to need to do laundry basically daily. Their socks and underwear, their sheets. and put their sneakers through the wash too.
I can’t emphasize this enough: protecting your family involves a lot of laundry.
Man: Oh. Um.

Posted by Heidi Lindborg at 7:51 AM

I believe that the majority of mental illness is secondary symptoms of common chronic infections. I have a couple websites outlining my ideas on sleep disorders, depression, mania and dementia. This is where I put my other thoughts and try to document the atrocities occurring daily in the Infection Industrial Complex.
My goal is not to convince you that my ideas are right, but to show you there is more than one way to interpret scientific data.