My Kingdom for this Knowledge 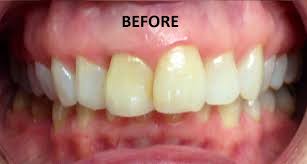 This is what bad sockets look like.  They drain yellow goop downwards.
These are crowded too close together and the nerves are probably constantly pinched.
2 front top teeth, drain down on 7 bottom teeth.
Look at how perfect they are otherwise.

This seems to be a thing, the crowding pinches the sockets.
My bad left bicuspid was lodged between two others, got pinched every time I chewed.
But it always looked perfect.  It never got a cavity.  And even though I had nine years of orthodontia,  my dentists never even noticed it - (Yeah, it would have been nice if they had pulled the bad tooth instead of the four others they chose to extract.)
Nobody ever mentioned it- even the hotshot high-tech dentist when I was 45 and had my entire mouth overhauled to alleviate my excruciating head pain...
That nerve started twitching when I was four years old.  Which is about the time I started sleepwalking.
It had stopped hurting by the time I was 17.  The suicidal ideation started around then.
And even though it was tweaked my whole life and the socket was basically an open sore in my mouth, I couldn't feel it and it didn't fall out until I was 53 and my Arizona dentist pushed it to the side and out of the trap.
It took two more years to figure out how to heal the wound though...

That tooth was like a railroad spike jamming into my ulcerated upper jaw my entire life.
A little Benzocaine probably could have diagnosed and solved the acute problem before I ground down all my other teeth, my entire head was affected, and my metabolism was shot.

It's a really nice tooth.  I'm having it silverplated.  It's my reward for not killing myself.

(for the record, I don't know whose teeth these are, but the right side upper and lower molars are toast, and this person definitely has auditory phenomena.  Probably both hearing loss and tinnitus or hallucinations.   But the dentist is marketing having the front ones straightened.)

(and just for some bonus irony, whitening yellow teeth with hydrogen peroxide makes the gums dry out and more prone to infection)

Posted by Heidi Lindborg at 7:55 AM