Here's an old song to chase the blues away.

Trade your bread and butter for a smile.
Posted by Heidi Lindborg at 5:27 PM

This seems to be a source of speculation among narcolepsy researchers:

I think this is explained by the interactive nature of the pathology.
African-Americans probably have better viral immunity. Viral immunity is known to correlate with APOE subtype, and the APOE genes also correlate with skin pigmentation.
Japanese people have higher rates of alcoholism than caucasians. Impaired alcohol dehydrogenase function is especially common.
Posted by Heidi Lindborg at 9:40 PM 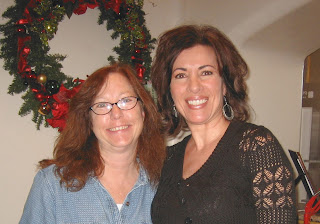 I finally met one of you guys!

This is Anna V from the Alumni page. I was down in Arizona last week and got to meet with her for a short while. She's doing great, but did cheat on Thanksgiving...
She's so cheery, you'd never even guess she's a zombie!

She reminds me to tell you to have your thyroid function checked. Both Low and High levels are associated with gluten intolerance.
Posted by Heidi Lindborg at 4:19 PM

I think this picture just about sums it up.