The research we've all been waiting for:


Read Kara Swisher whenever you can.  She's brilliant.

How and Why Silicon Valley Gets High  NYTimes


Michael Pollan, whose recent book, “How to Change Your Mind,” talks about the resurgence of psychedelic drugs, told me in an interview that the exploration of drugs by tech workers remains part of the industry’s “hacking ethos.”

Mr. Pollan is not surprised that Silicon Valley is behind that push. He points to a range of other tech-fueled efforts — fasting, food-hacking, nootropics (drugs meant to stimulate memory and cognitive function) and attempts to stop aging and even death — that are on trend right now.
“It is all about finding a technology to improve biology,” said Mr. Pollan.

...the 24-year-old, who fatally shot himself as well as several others, was described as a “disgruntled” gamer who’d been in the tournament in the past, had used handles like Bread and mrslicedbread...
Posted by Heidi Lindborg at 4:55 PM

In case you need something else to read.

Consuming milk at breakfast lowers blood glucose throughout the day


"We expected to see an increase in enteropathogenic bacteria such as Campylobacter, Shigella or even Salmonella in the malnourished children," comments Pascale Vonaesch, "but we certainly didn't expect to see oropharyngeal bacteria!" "What also surprised us was the sheer number of these bacteria," adds Philippe Sansonetti. "We had already observed this type of phenomenon for some inflammatory bowel diseases and colon cancer, but never such large-scale migrations. There are 10 to 100 times more bacteria than in the control patients."

Sweeter dreams in a peaceful mind

Excellent documentation of the obvious.  Our shaman ancestors thank you for your service.


The new micro-organ is the place where the immune system 'remembers' diseases it has been vaccinated against.  The researchers reveal the existence of thin, flattened structures extending over the surface of lymph nodes in mice. These dynamic structures are not always present: instead, they appear only when needed to fight an infection against which the animal has previously been exposed.


The influence of genetics on nutritional requirements
Different people metabolize food differently depending on their genes.


"In many ways, cancers are akin to wounds that never heal," Cho said. "Here we're showing a new mechanism for how inflammation from chronic tissue damage can actually lead to cancer.

I have been thinking this for about a decade now.
Keep calm and Restore your epithelial integrity.

Posted by Heidi Lindborg at 8:54 AM

Here, some stuff you can read.

It’s easy to become obese in America. These 7 charts explain why.

Why would you get an intestinal infection, like C. diff, from treating a different illness with antibiotics?

Robber blames doctor and pharmacist for crimes, sues them for $49,000
Bishop’s lawsuit claims her naturopathic doctor, Vanessa Esteves, and an unidentified pharmacist for Safeway prescribed and dispensed to her the mind-altering combination of drugs a few days before police say she frightened employees at the shoe store and bookstore and made off with the cash.

Laziness helped lead to extinction of Homo erectus
I don't think this was "laziness", Homo erectus seems to have a different brain metabolism, and a less urgent need to regulate their glucose levels.

The simple change that can save patient's lives
Reduce the sound level in hospitals.  (yo Jamie, read this one)

Scientists Are Developing a Unique Identifier for Your Brain
They are mapping the connections between areas, and think it is unique to each individual.

The Scientist Who Scrambled Darwin’s Tree of Life
How the microbiologist Carl Woese fundamentally changed the way we think about evolution and the origins of life.

States of Despair: A Closer Look at Rising State Death Rates from Drugs, Alcohol, and Suicide
my two cents: Death rates have risen 40% because opiates are shutting down immune systems, and people are going septic all over America.

Posted by Heidi Lindborg at 6:18 AM

Why I am Obsessed with Dehydration

BECAUSE I CAN'T FEEL IT.

This study was just published, it shows that rising orexin levels are a trigger for thirst.
That as a rat gets dehydrated it's orexin levels rise and this motivates it to seek water.

I find this does not happen for me.
If I am outside and sweating I will just become more and more focused and obsessive on finishing my task instead of seeking relief.   I think this is because the stress hormones are being activated instead...

During extracellular dehydration, neural systems that sense deficits in body fluid homeostasis operate in tandem with those that mediate motivation and reward in order to promote ingestive behaviors that restore fluid balance. We hypothesized that hypothalamic orexin (Ox) neurons act as an interface to couple brain regions sensing and processing information about body fluid status with central nervous system motivation and reward systems. An initial set of anterograde and retrograde tracing experiments suggested that structures along the lamina terminalis (LT), a region of the forebrain that serves to monitor and integrate information reflecting body fluid balance, project to hypothalamic Ox neurons that, in turn, project to dopamine neurons in the ventral tegmental area (VTA). A second set of experiments determined whether Ox neuron activation is associated with extracellular dehydration and the seeking out and consumption of water and saline. An elevation of Fos-like immunoreactivity in Ox neurons was observed in fluid-depleted rats that were allowed to ingest water and sodium. A final experiment was conducted to determine whether Ox release in the VTA promotes thirst and salt appetite. Bilateral microinjection of the Ox Type I receptor antagonist SB-408124 into the VTA prior to acute extracellular dehydration attenuated fluid intake. Together, these studies support the hypothesis that structures along the LT modulate activity in the VTA through actions of orexinergic neurons that have cell bodies in the hypothalamus. This pathway may function to facilitate sustained consumption of fluids necessary for restoration of fluid balance.

Anyhow, I'm pretty sure that explains a whole lot of my problems since I moved here to the desert.
I'm crispy as a tato chip...
And I don't want to take a frakkin shower.

Here, some more links to add to my list:

oh my...
Drought In Central Europe Reveals Cautionary 'Hunger Stones' In Czech River
"Over a dozen of the hunger stones, chosen to record low water levels, can now be seen in and near the northern Czech town of Decin near the German border," the AP writes.
One of the stones on the banks of the Elbe is carved with the words "Wenn du mich siehst, dann weine": "If you see me, weep."
Posted by Heidi Lindborg at 4:56 AM

Musk is by his own admission highly sleep-deprived, a condition that in everybody who suffers from it results in impaired judgment at best, and outright disaster at worst. When you suffer from this affliction, you lose reasoning and problem-solving skills; you also suffer from short-term memory loss and stop being able to learn from your prior mistakes.
Posted by Heidi Lindborg at 10:36 AM

Hypervigilance is a symptom

Tucker Carlson’s Taco Tantrum: ‘It’s An American Food! ... Those Are My Tacos. Mine!’

Here, let me google that for you.
Posted by Heidi Lindborg at 3:26 AM

Obsession I can Appreciate

Dutch engineer/artist Theo Jansen is known for his Strandbeests, giant kinetic sculptures that move along the beach on their own, powered only by the wind.

Now that is one of the coolest things I have ever seen.   Looks like a living fossil.
Posted by Heidi Lindborg at 9:44 AM

Lack of Impulse Control is a Symptom

A 29 year old suicidal male stole an airplane and used it for a joy flight before he crashed it and died. 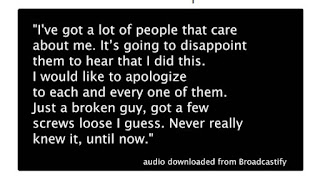 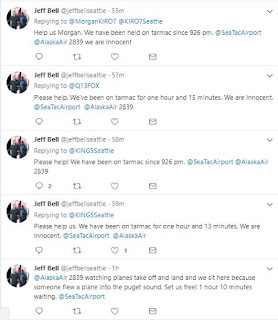 Posted by Heidi Lindborg at 8:53 AM

BASEL, SWITZERLAND—According to a Live Science report, a wad of 2,000-year-old papyrus from the collections of the University of Basel has been restored and translated, revealing a previously unknown composition. An examination of the papyrus with ultraviolet and infrared light revealed the sheets may have been stuck together, possibly to be reused as a bookbinding. Once a restorer separated the wad into individual sheets, the Greek text could be read. Ancient historian Sabine Huebner explained the papyrus bears a medical text that may have been composed by the Roman physician Galen, who lived from A.D. 130 to 210. The text may also comprise a commentary on Galen's work, describing a phenomenon he called “hysterical apnea.” Women afflicted with this so-called condition did not suffer from a “wandering womb,” as was thought by other physicians of the day, Galen is known to have argued, but from “hysterical suffocation,” brought on by a lack of intercourse. “

Because the advice I now receive from doctors is only slightly less self-serving.
Posted by Heidi Lindborg at 3:05 AM

I laugh every time I look at this. 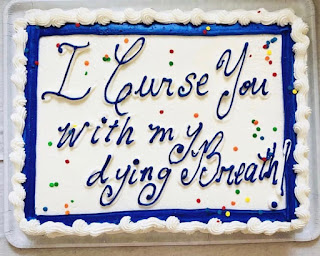 Posted by Heidi Lindborg at 6:50 AM

Hydrate. Lubricate. Sleep on an incline.

Dehydration study says as we get parched, cognition can easily sputter.

There are more suicides in US and Mexico when the temperature rises.


I am at the point in the summer where I can't sleep at night and my ears start popping or ringing when the AC flips on.

Please do not use a humidifier when you are lying down.  Your breathing and waking mechanisms are impaired.

I find saline swabs up the nose for a couple minutes helps a lot.
Oil your mouth and moisturize your skin...
Posted by Heidi Lindborg at 3:31 AM

He's metabolically debilitated and apparently it's making him cranky.

Posted by Heidi Lindborg at 5:56 AM

Trump voters are not especially toothless.
My observations indicate they usually have a face full of rotten stumps, don't even bother to get them pulled.