I have linked to this article before.  Took forever to find it again.  Ha.
Parasites Can Mind-Control Animals Without Infecting Them

The tapeworm doesn’t passively go along for this convoluted ride. When it enters sticklebacks, it somehow changes their behavior so they swim toward warmer water...
(After simulated attacks) groups of uninfected fish would flee to the bottom of the tank, to hide among the plants there. By contrast, infected sticklebacks stuck to the danger zone. “These guys, they don’t care,” says Scharsack. “If you try to scare them they hardly respond.”

Their bold behavior could also influence their peers. Like many animals that live in shoals and flocks, sticklebacks are incredibly sensitive to the actions of their neighbors. Small decisions made by individuals can translate into large collective movements by the group. And if certain individuals are infected by a mind-controlling parasite, to an extent, the group is too.

Demandt and Saus demonstrated this by repeating their experiment with mixed groups of infected and uninfected individuals. They showed that if the infected were in the majority, the uninfected ones followed them, staying in the danger zone instead of fleeing. Such indirect control has never been documented before, and might benefit the parasite. If a larger shoal of devil-may-care fish stays at the water’s surface, predators might be more likely to find and attack them, again increasing the chances that they’ll swallow an infected individual.

And what of the sticklebacks? Sticking with the group isn’t necessarily the wrong decision, given that it provides safety in numbers. But in this case, the tapeworm might be converting safety in numbers into danger for all.

...There are lessons here for humans, too. In classic experiments from the 1950s, Solomon Asch showed that volunteers could often be persuaded to give what were clearly wrong answers to simple questions if others around them—actually paid actors—answered wrongly too. In many cases, the volunteers were certain that the actors were wrong, but went along with their decisions nonetheless. A bad idea, just like a parasitic tapeworm, can also influence the minds of those who aren’t directly touched by it. 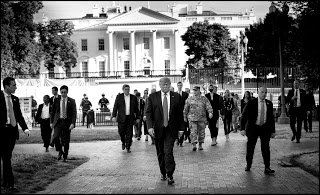 Posted by Heidi Lindborg at 4:16 AM