So many angry young men

Wisdom teeth or third molars are the last, most posteriorly placed permanent teeth to erupt. They usually erupt into the mouth between 17 and 25 years of age.

Posted by Heidi Lindborg at 6:36 AM

On the topic of Expected Behavior

The Buffalo shooter had a toothache

And that article is totally full of shit about why that matters.   It's not political.

Having a toothache for six months will make you crazy.   Period.  Chronic Septicemia will make you desperate and obsessive.  This Is Predictable Behavior.

But you don't get to choose your obsession.  Righteousness and impulsivity just take over your mind.

I predicted exactly this type of bullshit at the beginning of the pandemic.   So many boys trapped in their basements with their sugary snacks, dental infections, internet induced outrage... and guns.

Posted by Heidi Lindborg at 2:48 PM

We'll start by removing your coronary artery stents.  No modern technology for you.

Posted by Heidi Lindborg at 3:01 AM

As I was saying

A completely predictable outcome. But of course.

A new University of Florida Health study found that men with COVID-19 are more than three times more likely to be diagnosed with erectile dysfunction, or ED, than those who are not sickened by the coronavirus. The paper adds to emerging evidence that COVID-19 might impact sexual function, researchers said.

The Goddess Nemesis has chosen the most appropriate punishment for the recent excessive displays of hubris.

Posted by Heidi Lindborg at 1:13 PM

You don't get to choose your obsession 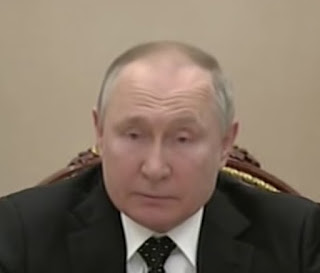 Putin has Parkinson's. His daughter admitted it last year. Recent video show his impairment and this picture shows he has no facial muscle tone, also known as a Parkinson's mask.

A prescription for L-dopa would explain a whole lot about his recent behavior. L-dopa is well documented to cause obsessive-compulsive behavior. Sex and gambling addictions are a big problem doctors are told to watch for.

My father was lucky. He didn't leave his wife or squander all his money. He became obsessed with Roy Orbison's music. He played the same double album over and over on giant speakers at ridiculous levels for months. I thought that was pretty inconsiderate and annoying... but at least he wasn't a sociopath and didn't have access to tanks or nukes at the time.

Behold the power of dopamine.

Russians 'totally devastated' after Putin flushed their economy 'down the toilet in five days'.

Posted by Heidi Lindborg at 7:31 AM