If you have one, NOW would be a real good time to clean your bathtub.
You may want to sit in it soon.
Posted by Heidi Lindborg at 8:48 AM

Mike Pence will now preside over the rapture of a lot of sick old men.
Fascinating.

I just had visions of all those kidnapped children in those $650/night immigrant shelter beds.
Holy Frankenfuck.

Posted by Heidi Lindborg at 2:15 AM

The major symptoms are separated by the nerves that trigger them.

Body tics come from the Phrenic nerve.  It twitches your shoulder and spasms the diaphragm.
The phrenic nerve is irritated by lower molar infection.
It can also be triggered by injury at the clavicle or lowest ribs.
This seems to cause grunts, and sounds with consonants, and hard H.
"I hate you."  (I say this a lot.)

Vocal tics come from the Glossopharyngeal nerve.
The glossopharyngeal nerve terminates above the upper second molar.  It innervates the tongue and parotid gland.  When the upper molar or parotid gland is inflamed, tongue movement and vocalizations ensue.  And salivary insufficiency inhibits healing of infected tissues...
I tend to say words with the letter L or R in them when this happens.
"I love you." (I say this a lot, too.)

The interaction between them is interesting.   Especially if they are on the same side...
And chewing and talking then compounds the irritation and weirdness.
"I hate you so much I want you to be my friend."   (Yes I say nonsensical shit like this out loud.  And then I hear it.   And then I say "no, that's not true." Just to stay sane.)

Loopy loopy loops.
Posted by Heidi Lindborg at 7:47 AM

I love the idea of Medicare for All.
I hate the idea of another toxic old man impulsively yelling from the White House.
Posted by Heidi Lindborg at 6:38 AM

Well, the verbal tics are back and definitely associated with the upper molars, not the bottom.
I am talking again,  and today the gap between my upper rear two molars had something sharp stuck in it.   I could hear the nerve firing in my ear when I woke up.  My teeth were chattery too.  Didn't realize that was a symptom, I associate shivering with cold  and dehydration.
I am not having the shoulder spasms that radiate down to my rib cage and tailbone and knees and drop me to the floor, though.  That's really nice.  Really improves my quality of life.  Ha.

There's a guy who made a tooth retainer thing that puts pressure between the upper and lower molars.   He thinks it's the position of the jaw that is wrong.   I am pretty sure that he's not really addressing the problem though.  This is definitely related to tissue damage.  I think he's just smashing the nerves that are inflamed...

I believe I have found a way to drain the parotid gland.
I put an "end tuft toothbrush" in my shower to do this with the rest of my routine.  The spongy swabs do not seem to be strong enough for this procedure. 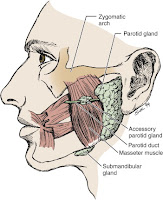 The parotid salivary gland is located behind your molars and in front of your ear.
The duct runs down along your upper jaw and drains out of the cheek outside the upper molars.

I have found that you need to trigger it on the inside of the teeth though.
I take the back of the little toothbrush and push against the jaw above the rear molar.  I can't describe it exactly, but it's up there where the tooth roots are. I usually have to try a couple different places.
There's a spot up there that if you push and HOLD for a couple seconds it will activate the draining sequence.    It's sort of like a windshield washer unit-   If you push and hold it, a second or so later it will pump a few times and then drain into your mouth.  Then you want to use the swab.  Heh.

It's very odd, but it seems to work and I have tried it numerous times just to check I'm not imagining it.  And my cheekbones are now more prominent and my entire face is slimmer.   I sure could have used this advice when I was 17 and obsessed with cheekbones...

(I will now add this suggestion to the shower post.)


Later:   and since these two things are more or less in the same place, I will now clearly have to research those nerves....
Same as it ever was.

Update:   I put my electric toothbrush on that spot and it worked really well.   Maybe too well for some people- the vibrations were sort of shocking and the gag reflex pretty strong.
Posted by Heidi Lindborg at 7:48 AM

Sick in the Head

Trump at Nascar race yesterday.   Please tell me you can see that parotid gland inflammation...
Other side looks much the same. 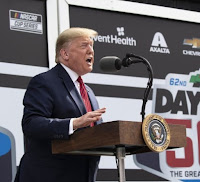 Posted by Heidi Lindborg at 5:53 PM

This article is going around-  it's pretty clever.

Let’s Talk About Protecting Our Families


Man: Hey God, I just want you to know I am committed to protecting my family at all costs.
God: Gosh, that’s great to hear. One of the main things I need you to do to protect your family is laundry. Tons of laundry.
You know kids — they’re so susceptible to infections and viruses. Pinworms, athlete’s foot, lice, strep throat, colds and flues. Pneumonia and diarrhea are serious killers of children under five. The list of possible sicknesses is endless. So you’re going to need to do laundry basically daily. Their socks and underwear, their sheets. and put their sneakers through the wash too.
I can’t emphasize this enough: protecting your family involves a lot of laundry.
Man: Oh. Um.

Heh.  My experience is that most narcoleptic men will try every other available treatment option after I tell them they need to stop eating gluten and go to the dentist.
Posted by Heidi Lindborg at 2:14 AM

I have been listening to a lot of YouTube science while I paint the house.

I love this guy- Stefan Milo.  He's delightfully curious.
Here's his video about Sinus Infections.  Every kid on the planet should see this when they're 8 years old.  And be taught proper hygiene methods.    It would have changed the entire trajectory of my life.

(He also discusses the recurrent laryngeal nerve, which is one of my suspects for Tourette's symptoms.)
Posted by Heidi Lindborg at 7:26 AM

Have we found the true cause of diabetes, stroke and Alzheimer's?

The diseases most people die of have been attributed to unhealthy lifestyles. But evidence now suggests bacteria are to blame, heralding a revolution in medicine.

Strikingly, many of the afflictions of ageing – from rheumatoid arthritis to Parkinson’s – are more likely, more severe, or both, in people with gum disease. It is possible that some third thing goes wrong, leading to both gum disease and the other maladies. But there is increasing evidence that the relationship is direct: the bacteria behind gum disease help cause the others.
...

In January, teams at eight universities and the San Francisco company Cortexyme found a protein-digesting enzyme called gingipain, produced only by P. gingivalis, in 99 per cent of brain samples from people who died with Alzheimer’s, at levels corresponding to the severity of the condition. They also found the bacteria in spinal fluid. Giving mice the bacteria caused symptoms of Alzheimer’s, and blocking gingipains reversed the damage.
Moreover, half of the brain samples from people without Alzheimer’s also had gingipain and amyloid, but at lower levels. That is as you would expect if P. gingivalis causes Alzheimer’s, because damage can accumulate for 20 years before symptoms start. People who develop symptoms may be those who accumulate enough gingipain damage during their lifetimes, says Casey Lynch at Cortexyme.
...

P. gingivalis may literally break our hearts too. There is growing evidence for a causal link to atherosclerosis, or “hardening of the arteries”. Researchers have found P. gingivalis in the fatty deposits that line arterial walls and cause blood clots. When bits of clots clog blood vessels in hearts or brains, they cause heart attack and stroke.
The bacteria trigger the molecular changes in artery linings that are typical of atherosclerosis, says Genco. We have also found that P. gingivalis creates the lipoproteins thought to trigger atherosclerosis, causes it in pigs and affects arteries much like high fat diets. Lakshmyya Kesavalu at the University of Florida, who has cultured viable P. gingivalis from the atherosclerotic aortas of mice, calls the bacteria “causal”.
...

The link is clearer for type 2 diabetes, in which people lose sensitivity to insulin and eventually can’t make enough to control blood sugar. It is currently a pandemic, blamed on the usual lifestyle suspects.
Diabetes worsens gum disease, because high blood sugar levels hurt immune cells. But gum disease also worsens diabetes, and treating it helps as much as adding a second drug to the regimen taken by someone with the condition, according to the American Academy of Periodontology. Treatment is now recommended by diabetes associations, yet none of them list gum disease as a risk factor. As with other conditions, there is evidence that P. gingivalis isn’t promoting diabetes just by adding to the body’s inflammatory load, but may also be acting directly in the liver and pancreas to cut insulin sensitivity.

“It is very hard to prove causation in a complex disease,” says Genco. We know that mice given a mouthful of P. gingivalis get gum disease – and diabetes, rheumatoid arthritis, atherosclerosis, fatty liver disease and Alzheimer’s-like symptoms. We know that, in humans, gum disease makes the other diseases more likely, and that P. gingivalis lurks in the affected tissues and makes the precise cellular changes typical of these conditions.


This article is worth every penny of the $25 dollars I just spent to renew my subscription. And I already knew most of it.   I hope your library can get you access.  I can't copy and paste all of it.

This is the most important thing happening on the planet right now.
This is a fundamental paradigm shift that affects every single one of us.
In normal times this would be getting a lot of coverage.

But nooooooooo.... we can't have basic science or simple solutions or good news anymore.....instead we must spend every byte of every communication medium panicking over the apocalyptic antics of one very extreme case of this pathology....

And on that theme:
This is the toothpaste I have been looking for.

Cleure Natural Baking Soda Toothpaste
I look for unflavored toothpaste because the mint and fruit and bubblegum ones taste so gross.  I really like this one.   It's slightly sweet.  This stuff feels so good, not foamy or waxy, leaves my gums much happier, and my sad old teeth smoother and whiter than anything else I've tried.   Totally worth the price.
Posted by Heidi Lindborg at 4:01 AM